The recent review of Sensomusic Usine Hollyhock 3 outlined some of the patches and effects that I used during the making of ‘the prismatic effect of beaches on memory’ album.

Hollyhock 3 is equally at home being used for live performance and this is how I recorded inflexions #003 as a live set.

I’ve deliberately kept the number of elements small in order to produce a minimal type of sound and focus on editing a limited number of parameters which is easier to do during a live performance. One thing I need to look at for future performances is using a midi controller rather than the mouse. I really need a control interface with a lot more dials than trigger pads, a mixer seems a better option as keyboard controllers rarely have anywhere near enough dials. I could also set up an interface using touch-osc and control the key parameters using a tablet, this doesn’t have the same satisfaction as a physical controller but would provide a cost free alternative.

I started using fugue 2.0 with the Arreight Synth and Mogger Super Delay. This is a slightly unusual use for the fugue machine which is a midi based pianoroll sequencer and fugue 2.0 is an updated version of the original. You can use it to create some Bach sounding movements but I’ve used it here to produce more of a background drone type sound. The different parameters of an Arreight preset were randomised during the performance. You can hear an almost tape delay effect due to the timing of randomising the delay time setting.

I’ve used the U Drone synth with Mogger Reverb and Mogger Super Delay to provide subtle background sounds. I’ve triggered, looped and removed sounds a lot during the performance and tried to layer bass drones with swirls and higher pitched sounds to varying degrees. 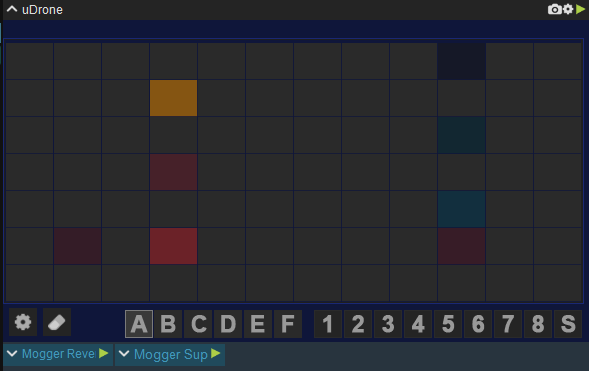 Groove mangle provides a subtle rhythm and parameters were adjusted during the performance. I primarily changed the sample width, grain size and triggering pattern which had a big influence on the resulting sound. 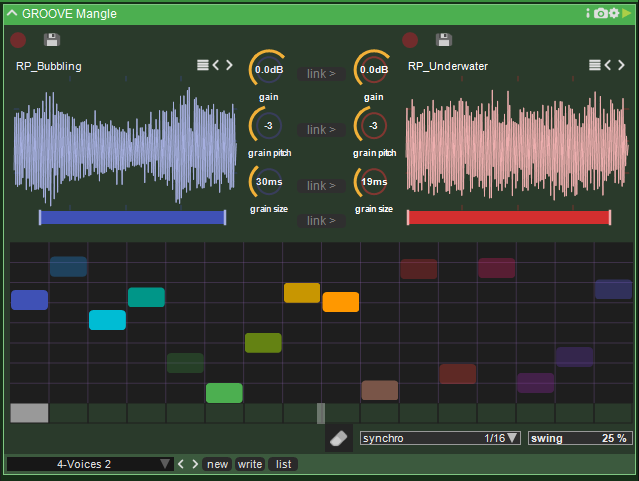 I used the drum machine for the main rhythm starting with a randomised setting. I made some minor adjustments to the pattern before reducing it towards the end which is shown on the graphic. I made use of the freez, random and break settings during the performance.

The gird I used was relatively simple, I used fade-in and fade-out settings for each of the elements and used timings to spread out and gradually layer the sounds but didn’t use any other automation as all the changes were done live during the performance.

The only VSTs I used were the usual ‘pre-master’ of Ferric TDS and Density MkIII, the mix was mastered in MuLab 7 using Elevate by Eventide / Newfangled Audio. This was a trial run for a forthcoming review, initial impressions are very good, it’s feature packed, easy to use and produces a great sound.