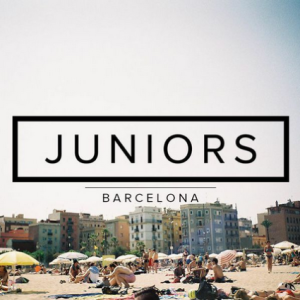 Juniors on twitter
BlueSoapMusic on twitter
Robot Needs Home website
Following the conveniently timed demise of previous band projects, school friends Jamie Hives (vocals/guitar), Jake Tasker (bass) and William Bond (drums) from Leicester put together new project JUNIORS in 2013, later asking Daniel Lee to complete the lineup on guitar in 2014.
Barcelona is their third EP on Robot Needs Home and will be released on 20th April and is available for pre-order on iTunes now. You can also catch Juniors at Leicester’s Handmade Festival on 3rd May.
Juniors have created a really solid sound to this EP, a fusion of indie and rock styles with a great edge and drive. Really solid drumming gives momentum and there’s great guitar playing and some nice synth sounds and effects too.
Elusion The video is embedded above. There are really nice reversed sounds followed by a driving riff and synth to open the song. It has a great momentum being propelled along by solid drumming and bass. I really like the riffing which has a great tone and there’s also really good layering of sounds. The vocals are solid and have a nice edge to them.
We Swim This song has a great riff to open and a more laid feel back but there is still an urgency to the song. The vocals again are solid with some really good harmonies. The riffing again is really good too, having a funky/jazzy feel at times. There’s also a nice solo section.
Declare and Surrender The song has a great atmospheric opening leading to an excellent riff. The verse then has a sparser feel incorporating the riff at times. Solid vocals again which give a great nice tension to the song against the riffing and there’s a great variation in the riffing too.
The EP also features a Radio Edit of ‘We Swim’ which is essentially the same song so I’ve not added any further comments to those above.

Review of Everybody Says So single by Joni Fuller

Review of These Days EP by LDCN