Sometimes when a music making app doesn’t require much knowledge of music it can be a bit gimmicky or a toy that isn’t much practical use.
This certainly isn’t the case with Yellofier, it’s an accomplished app that is easy to get the hang of, has loads of potential for creating your own songs and the export quality is very good too.
It is basically a four track recorder in which you create songs up to 100 bars long by using a 4*4 grid and coloured blocks to represent sounds and you can apply one effect from the range available to each sound.
There are 8 coloured blocks and each one represents a sound. Yellofier comes with 6 preloaded sound libraries giving 48 sounds in total. There are some pretty good bass, drum, percussion, vocal snippets, fx and synth sounds in there. These are fixed meaning you can’t mix and match between different banks nor can the sounds be altered but the good news is there are also 2 user banks you can load your own samples into.  This really expands the usability of the app allowing you to add your own style to your songs which means they shouldn’t sound too samey compared to other users.
I also really like how you can record sounds on your phone to capture a particular moment or alternatively load a wav file into the user bank.  Once loaded you can slice the file by dragging markers to the required points. A good tip here is to create a wav file with 8 sounds that you want to use and then use the markers to delineate the file into 8 separate samples. It seems to cope with a wav file of about 15 seconds, not sure what the maximum is (seems to be just under 20s) but if you exceed the maximum length it just chops the end of the file off. This tip really helps you to get the most out of a user bank.  For instance if you load a sustaining synth sound no matter how hard you try, when you slice it you’ll only get 8 versions of the same sound which is a bit of a waste. 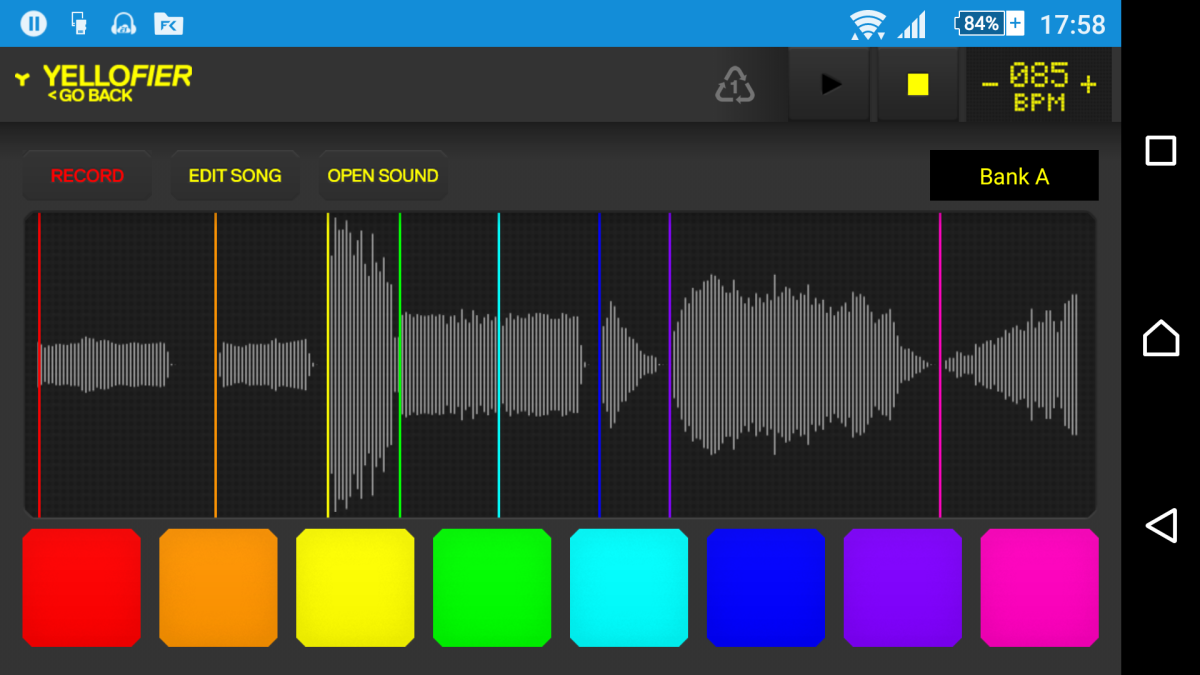 There are also 8 effects available, one of which can be applied to each sample. From top to bottom these are higher pitch dub Delay : distortion : squelch : bassifier  : detuner : dub Delay same pitch : reverser : distortion. In fact there are more effects because each of these can be rotated to give a variation on a theme.
Creating songs is very straightforward.  The 4*4 grid acts like beats in a bar so a 4:4 rhythm can be obtained by putting a block in the first box of each row. You can add effects simply by selecting the desired effect and touching the block you want it applied to. Just make sure you haven’t changed the coloured block or the selected one will be applied instead. A little know function here is swiping up / down to change the volume shown by a lighter / darker colour and also long press then swipe up or down alters the pitch in semitones up or down. This allows you to create basslines from a single sample for instance. I do find rotating the effects quite hard to do without unintentionally changing the volume. There’s also a randomise function which is a great way to spark a few ideas, I used this quite a lot to create songs myself.  There are a good range of demo songs which will give you an idea where to place blocks if you are struggling to get the right sort of sound. 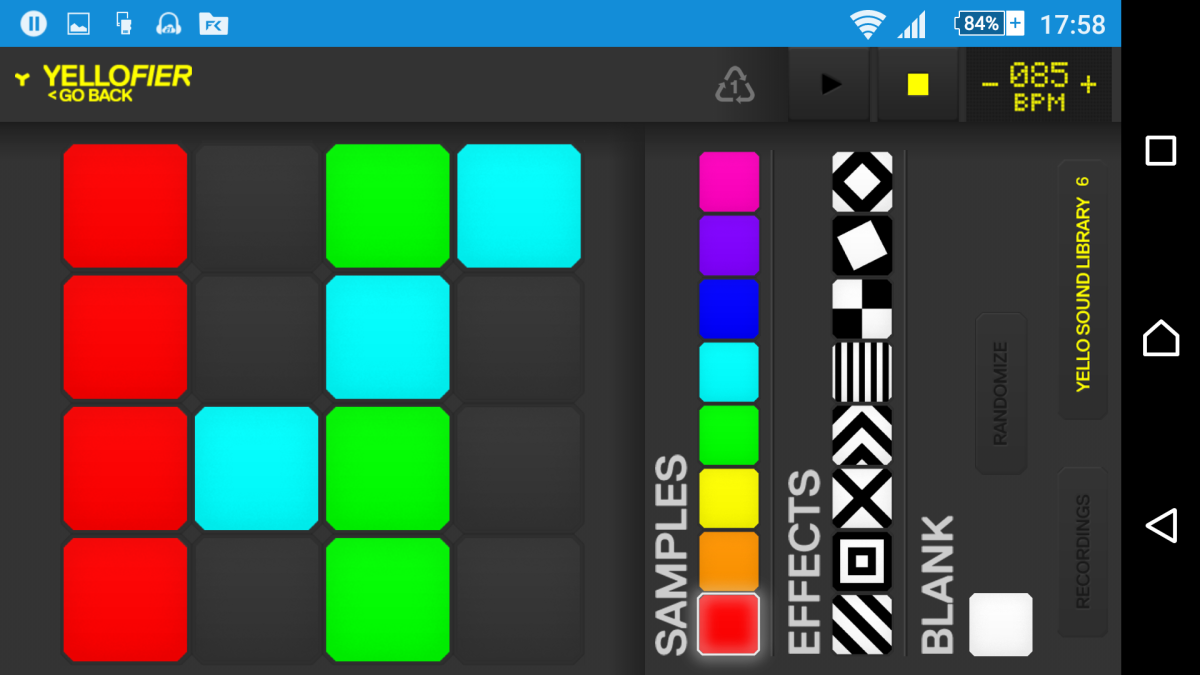 Once you’ve created a block you can copy by swiping to the bar you want to copy it to. However, BEWARE THE LONG PRESS! I’ve had to highlight this fact because if you long press you’ll delete it.  I’ve done this countless times and when it’s been a random pattern there’s no way to get it back.   To copy your pattern to a bar further along than is shown on screen you’ll need to drag to the little arrow in the gray bars at the left or right hand side of the screen to move up or down the timeline. This can be timeconsuming and a bit frustrating at times and there doesn’t appear to be a way to copy sections or more than one pattern at once. 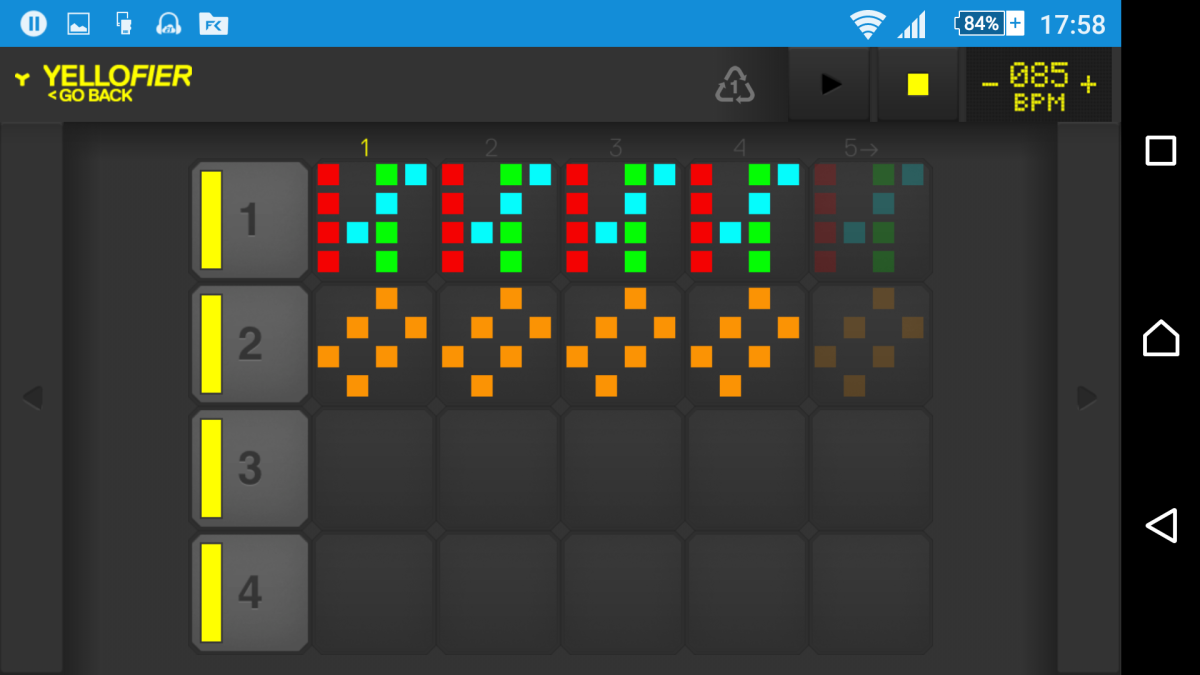 The biggest problem I found was saving the songs. I’m not sure if it was my phone or because I was running Yellofier off my sd card but it didn’t save my songs properly even though I was meticulous at naming and saving. That’s a real shame because I created about a dozen tracks but could only retrieve about half of them.
Once you’ve finished your song you can share the song file with other Yellofier users or you can export to MP3 or export to soundcloud.
There are limitations to the app, the fact there are only 2 user sound banks and therefore a reliance on the inbuilt sounds might not suit everyone, also there is a 100 bar limit when creating songs which means the maximum length of a song is about 4 minutes depending on the tempo.
However it is very easy to get to grips with and may well provide new sources of inspiration and is definitely worth checking out.  You can create tracks very quickly with little musical knowledge, the random function is excellent for this. The sound quality of the exported MP3 files is also very good.
Despite the fact I lost a number of songs, I really enjoyed using the app and so decided to create some more to make up for those I’d lost.  Given the random nature of the app’s behaviour, I decided to use randomness as the basis for new songs using the randomise feature to create patterns for rhythms or fills / effects often using looping or repeating sections against them as a contrast. The song creation process was deliberately spontaneous with no editing and immediate export to make sure I didn’t lose the song.
This resulted in The Hesperides Sessions (released on WEATNU Records) which is embedded at the top of this blog post.  All songs were created and arranged in the android version of Yellofier on a Sony Z3 and then mastered in MuLab.

Proper music vs the music industry

Review of MuLab 7.2 DAW by MuTools