Version 6.3.6 is the latest version of Mulab at the time of this review.
To put it simply, Mulab 6 is a very impressive DAW. It is a very capable DAW which is incredibly reasonably priced at 69 EUR (~£50). However, do not be fooled into a price comparison to other similar products, this is a fully featured DAW having a built-in sample player, multisampler, synth and drum rack. It also has a good range of built in effects and all your favourite VSTIs load very easily too. It is very well designed, intuitive to use and best of all has excellent sound quality.
One feature that will be very useful to some users is the portability. The download file is very small, 17Mb, and the software installs easily into a directory which can then be copied to a memory stick to run from different computers, for instance.
Mulab 6 also has excellent support. There’s an active forum on KVR; Youtube channel; twitter; facebook and extensive online documentation.
Audio setup is similarly very quick and easy, the default settings worked fine on my laptop. On opening the software, the GUI is clean and very well laid out. It feels intuitive having used Ableton Live 8 with the different screen options and it’s easy enough to tinker about with one of the demo tracks – for instance adding notes, effects etc – straight away and make changes and get a really good feel for the software. 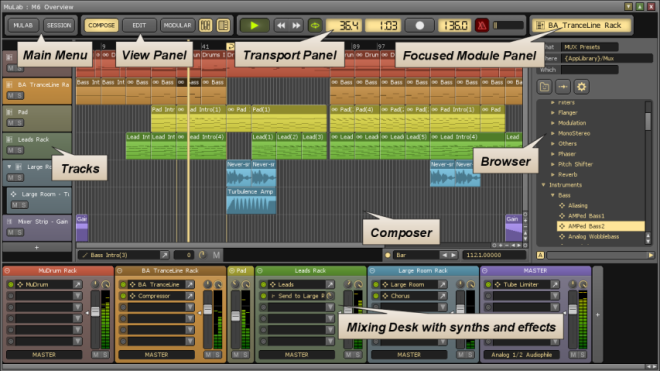 I have got a few VSTIs – ok, rather a lot – and it did take a little while to load them all, about 15 minutes in total but once scanned they are in the database and that’s that. Most scanned ok, I’ve apparently accidentally installed a couple of 64 bit VSTs which Mulab didn’t like and it did crash a couple of times which I subsequently found was nothing to do with Mulab, rather a very suspect VST file which I more than happily deleted. What really pleased me was that a couple of VSTIs that had stopped working in Ableton Live Lite worked absolutely fine in Mulab.
Racks are a key part of Mulab and they are very flexible. You can load an instrument and inline effects i.e. create a bass rack and then you can send all of your bass sequences to that rack. You can also set up a delay rack and use it as a send / return effect. They can also be set up for audio or midi events, for instance an arpeggiator VST. You just need to make sure the audio routing is set up correctly but this is straightforward.
With a midi synth plugged in, it’s simply a case of selecting it as a midi input and it works no fuss and I always find you need one to get the most out of any DAW software. When you record, you are then recording ‘events’ which are like midi patterns and are easy to edit and manipulate, for instance set the grid size or no grid for exact placement of notes if you need to tweak or adjust your recording. Automation is also easy to record and control.
Recording audio is easy too, Mulab has audio recorders which are very easy to use, it’s simply a case of choosing where you are recording from and recording too. This defaults to a new track but it’s an easy task to drop an audio recorder on a track header for more traditional track-based audio recording.
Loading a built in instrument into a rack shows the real versatility of Mulab. There are options of MuSynth, MuDrum, MuPad, MuSampla and MultiSampla and there are a great range of presets for these too.
MuSynth is a real workhorse synth, having a great range of sounds and is very well featured with 2 oscillators, multi-sample player and noise generator. Each of these can be processed by a ring modulator and upto 3 filters – each of which can have a cut-off LFO and/or envelope. MuSynth allows very flexible routing, nearly everything has an on/off switch and is highly configurable.
MuDrum is incredibly powerful and gives loads of flexibility. It has 12 velocity pads which can accept 12 samples each of which can be triggered by one of the 12 notes in an octave from a midi keyboard. It’s aspects like this that clearly show how well this software has been designed. You can load your favourite samples, save them as your favourite kits and leave it there. Alternatively you can fine tune the samples to a high degree. Initially you have control over pitch, tune, attack, decay, release and pan amongst other things as well as start and end points so it’s easy to reverse samples for instance. You also have 4 assignable racks so you can assign a specific reverb to a snare, for example or EQ a kick drum. But that’s not all, each pad has 3 elements – 2 sample players and a complete MUX. This means you can layer 2 samples together and the MUX gives synthesis, LFO, VSTIs – almost endless modular possibilities.

MuSampla is a single sample sampler and has all of the basics you need to edit and loop samples, change pitch, apply envelopes, filters etc. I’m a bit reluctant to use the term ‘basic’ because it is very powerful, works very well and is easy to use too.
MultiSampla allows you to load multiple samples and set up zones to allow velocity cross-fading between samples.
MuPad is an element of MuDrum which can be very useful in it’s own right although I haven’t explored this to any extent.
Another great feature of MuLab is known as the MUX modular which is a modular synth and effects plug-in. The visual interface is well designed and allows you to arrange effects chains using patching cables. It is straightforward to use and incredibly powerful and I haven’t even begun to explore the possibilities of this yet.
Audio files handle really easily, you just need to make sure the cursor is in the right place (took me a little while to release I needed to click near the bar numbers at the top rather than in the ‘work area’). It took me even longer to realise that the other and far easier way is to drag and drop using the file browser. It’s quick and easy to set up your sample folders as favourites which can then be accessed very easily. Dragging and dropping a sample loop gives you the option of loading as a streaming sample (as is); pitched (loads in MuSampla so you can manipulate it as needed) or sliced (process akin to convert to midi).
There are many more features which I keep finding, such as saving racks as presets; saving a preset and sample as a MuClip so that you can easily save drum patters, bass loops to load in other sessions or share with other users. I’m sure I’ll continue to find new techniques and opportunities as I learn the software further, especially the MUX which I’ve only had a brief play with so far.
There is a learning curve when switching DAWs but it’s not really that steep due to the intuitive nature of MuLab. I’ve been using it as my main DAW to write songs and carry out this review for 3 weeks and I’m really starting to get to grips with it. I’ve not noticed any latency issues and the software has been very stable. I’ve included a couple of screenshots from songs I’ve been working on as part of this review below. The audio from the project titled Deep Tech is embedded from bandcamp below. It was going to be a short demo but ended up as the full song complete with EQ and a basic mastering to give you an indication of the sound quality and also to demonstrate that you can create songs easily which is testament to the capability and usability of MuLab. I also found that the level meters are very easy to read and level adjustment is easy too. I found Ableton could be a bit finicky and would often end up with clipping whereas MuLab was definitely easier and felt a bit more forgiving, a check in Audacity showed I was about spot on with the levels and there definitely isn’t a compromise on sound quality. I will test this again with more of a glitchy sound just to be sure. Exporting audio to wav can be to a 16 or 32 bit file and is pretty quick. 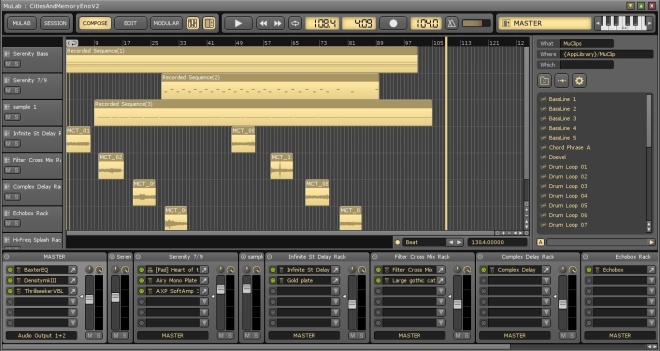 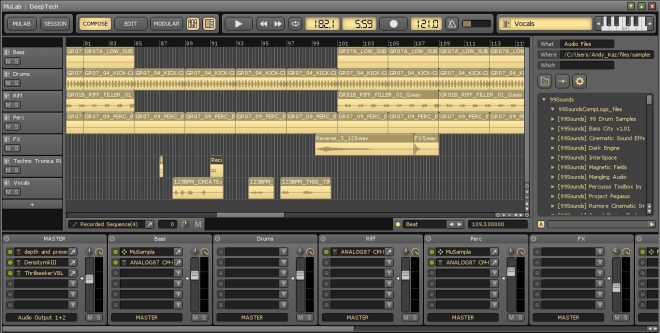 So in summary if you want an excellently featured DAW that has great sound quality and is very reasonably priced, MuLab is definitely worth checking out. If you’re tempted but not totally sure, why not try the free version? It has a 4 track, 8 VST limit amongst other restrictions but you’ll definitely get a good idea of how MuLab is flexible, powerful and easy to use.

Guitar pedals. I WANT SOME PEDALS!!!!