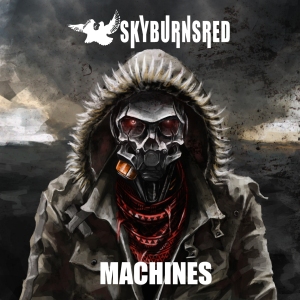 Machines is the new album by SkyBurnsRed released on 16 May 2014 by Omniphonic Records, available on iTunes, Bandcamp, Google Play and Amazon.
http://www.facebook.com/skyburnsred
https://www.twitter.com/SkyBurnsRedBand
http://www.omniphonic.co.uk
Skyburnsred are a rock band from Swindon.   They are described as ‘eclectic’ which is a good description, as long as your definition of eclectic means not being defined by one genre.
Machines is a 13 track album and all of them are solid tracks.  SkyBurnsRed not only have a great ability to balance elements such as acoustic guitar, violins and heavy riffing but are also excellent at building and releasing tension. Vocals are described as gritty, I don’t think that really does them enough justice. A bit edgy, at times tense,  create angst –  I could go on but basically they’re very, very good.
The album opens with ‘Human Malfunction’.  A solid opening track which introduces us to the Skyburnsred violin injected rock sound.   At times the guitar playing is quite heavy, balanced against acoustic parts.
Track 2′ Biting Hands’ has a similar sort of feel. Vocals really suit the style. The track builds and releases tension very well with a more acoustic orchestral section ending on a more tense note.
Track 3 ‘Pens down’ starts with a great riff and develops into a solid track with a feeling of anger / frustration. Again good use of building and releasing tension.
Track 4 ‘Lost at Sea’ opens with an orchestral section against an overdriven riff. Has a heavier feel than previous tracks but remains melodic and again vocals are excellent.
Track 5 ‘Constellations’ has a more acoustic feel.  It’s kind of a love song, sort of, but could easily be their anthem. Track builds nicely and has a great orchestral feel.
Track 6 ‘Riddle’ is then a stark contrast. Growling intro sounds kind of menacing and it maintains that sort of feel with heavy guitar playing and committed vocals. Orchestral parts are skilfully interwoven and the solo to end the track works very well.
Track 7 ‘Blah Blah Blah’ is a bit more uptempo but again has good tension and release elements.  This is one of the heavier tracks on the album.
Track 8 ‘Cowboys’ is a more melodic track, orchestration is subtle but keeps track moving.
Track 9 ‘Bring your bags’ starts with a ringing acoustic riff, building into another great song with build and release elements. It’s a song about getting back together and has a really good vibe.
Track 10 ‘Cat and Mouse’ then picks up the tempo again with a driving heavy rhythm.
Track 11 ‘It’s not me it’s you’ opens with orchestration with an acoustic feel before busting into heavy riffing. It’s a song about having something to say to someone and creates that atmosphere very well.
Track 12 ‘You can stop, just saying’ is another song with great drive and rhythm.
Track 13 little man has a ballad feel and is another great song. It ends with a subtle guitar solo which rounds the album off very well. This could also be an anthem. Well almost rounds the album off, after about a minute and a half of silence there’s a great little extra bit but you’ll have to listen to find out what it is.

Review of Saline Celestial album by Sevenism on Naviar Records

Review of Symbol, a 3 LP box set by The Band Whose Name is a Symbol on Cardinal Fuzz