Laura Woermke is a talented artist, she’s also the curator of St Thomas Elgin Public Art Centre, St Thomas, Ontario. You can find out more about Laura’s artwork on her facebook  and twitter pages. I’m very grateful that Laura has allowed me to use a piece of her artwork in this way and very generously has also allowed the artwork to form the cover of the album. It seemed appropriate in these circumstances to release the album under a creative commons licence and I’m delighted that the album has been released on the Fwonk netlabel.
I’m really drawn to Laura’s artwork and wondered whether I could create an EP using a drawing as the only source of sound. I have done this process before using a photo and creating a song titled ‘Grand Central’. However, since I’ve been using Hollyhock II as my main DAW I’ve thought for a while that a number of the manipulation tools would lend themselves very well to this task and so put it to the test.
Virtual ANS is a software simulator of the unique Russian synthesizer ANS – photoelectronic microtonal/spectral musical instrument created by Russian engineer Evgeny Murzin from 1938 to 1958. Murzin named his invention in honour of the composer Alexander Nikolayevich Scriabin. It is available for Windows, Linux, OS X, Android and iOS. More information can be found on the developer’s website.
You can convert sound to image (sonogram) or vice versa including loading image files into the program. Ink drawings lend themselves very well to conversion in virtual ANS. Dark areas of an image don’t produce sound whereas light areas do meaning that you often need to tweak the image contrast and/or brightness or in this case invert the image to produce sound in the desired way. 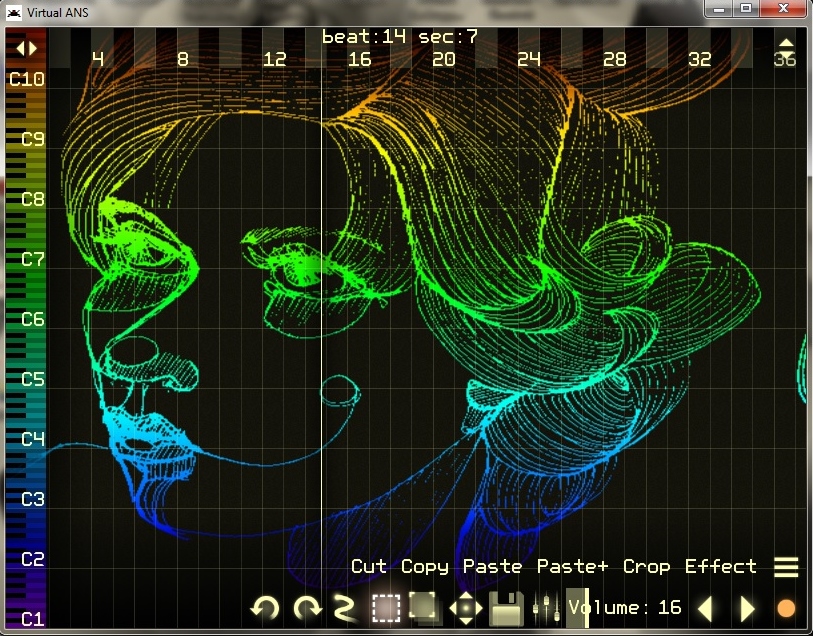 The title ‘The girl with the long flowing hair’ leapt out at me straight away as I looked at the drawing. A lot of my work considers perspective such as a bystander looking in or considering a situation from a different point of view. There is a certain mystery to the drawing, a sadness or solemness almost. You start to wonder who she is, if some people will recognise or know her and then also realise that some people won’t even notice her at all.
Once the sound file was created in virtual ANS it was subject to simple processing such as cutting into smaller pieces and reversing in preparation for manipulation in Usine Hollyhock II DAW. A number of manipulation processes were used within Hollyhock II including granulation, looping, creating generative rhythms, creating textures / drones and some generative rhythms were also created in Cataract by Glitchmachines. A number of effects such as bitcrusher, delay, reverb and filters were used in different combinations.

Creating an EP with 2 or 3 songs from the original sound source was my initial aim but even with all the available manipulation tools and effects at my disposal it’s quite a challenge because elements such as percussion, basslines and synths that would normally be included to give variation in the sound quality and timbre wouldn’t be available.
I also knew that a number of the processes wouldn’t layer well together so separated them out into groups which complimented or in some instances contrasted with each other. This meant there were potentially a large number of songs I could create and so the idea to create an album took hold. I did use a short vocal sample at the end of the third track, it’s like thinking out loud. I also recorded a reading but decided not to use it because it didn’t fit with the theme once the album started to take shape.
I have previously reviewed Hollyhock II DAW and since that review I’ve continued to use it for all of my projects, learning to use new features along the way. It is ideal for this type of project, once you’ve set up your workspace you record the performance live. Hollyhock II allows the use of automation through curves or more randomly with physics engines as well as modifying parameters and controls live as you are recording – with no loss or degradation to the sound quality. A big benefit of the workflow is that you can create subtle variations or complete contrasts very easily by changing settings and then recording another version. Many of the songs on this album have adjustments to the effects, processes or have samples triggered during recording of the song. Automation of some other effects was also used to give variation in sound and texture and hence a key part of the album is the creation of variations on a theme and also the creation of unique performances.
One of the tools I used is called U-Drone and is shown in the picture above. You load a single sample and then play it back by selecting the circles which represent notes across 6 octaves. This can create excellent bass drones, great textures and some unusual sound effects when the sample is played at much higher or lower note values than it was recorded at. By playing the notes in this way live as you record you create unique textures. Automation of grain sampler settings (shown below) is a great way to get controlled movement in your sounds and for more random sounds I used randomisation for the groove slicer tool (also shown below).

There are aspects of avant garde and Electronisch Musique to this album which has ambient, drone and experimental qualities. The process for creating the songs feels analogous to a deconstruction of the self and examination of its elemental parts such as personality, ego, desire, cognition. Like fleeting memories, drifting thoughts and internal conflict this album explores many perspectives on the girl with the long flowing hair.

The Music Challenge aka Creating Tracks from Samples