Introduction
Virtual instrument and effect plug-in developer Rob Papen Soundware is proud to announce availability of Go2 — an appropriately-named, go-to synthesizer, set apart from its award-winning software siblings by virtue of all its controls and features always being in plain sight and always available to access onscreen, so simplifying usage for the average user.

Overview
In the wonderful world of synthesis according to Rob Papen — wonderfully wide-ranging as it is, there was only one type of software synthesizer missing… until now, that is! Indeed, who better to make the formal introductions to Go2, then, than the talented individual to which the company owes both its existence and also its well-known name — renowned sound designer Rob Papen himself: “The Rob Papen brand contains many synthesizers with a different focus and types of synthesis. However, they have one thing in common, which is a vast number of features. A creative synthesizer which has all controls visible, and — in many cases — easier to use out of the box, was still missing. And now it’s here. Welcome to Go2!”

What’s impressive is how Rob Papen has included so many features into a single interface. Whilst this is designed to be easy to use, it includes a number of advanced features that take it beyond a basic synthesiser.

Go2 has around 600 presets and a quick look through these shows synths, pads, keys, arps, basses percussion and more. Listening to a few of these reveals that Go2 packs a powerful sound, they haven’t scrimped on sound quality either. 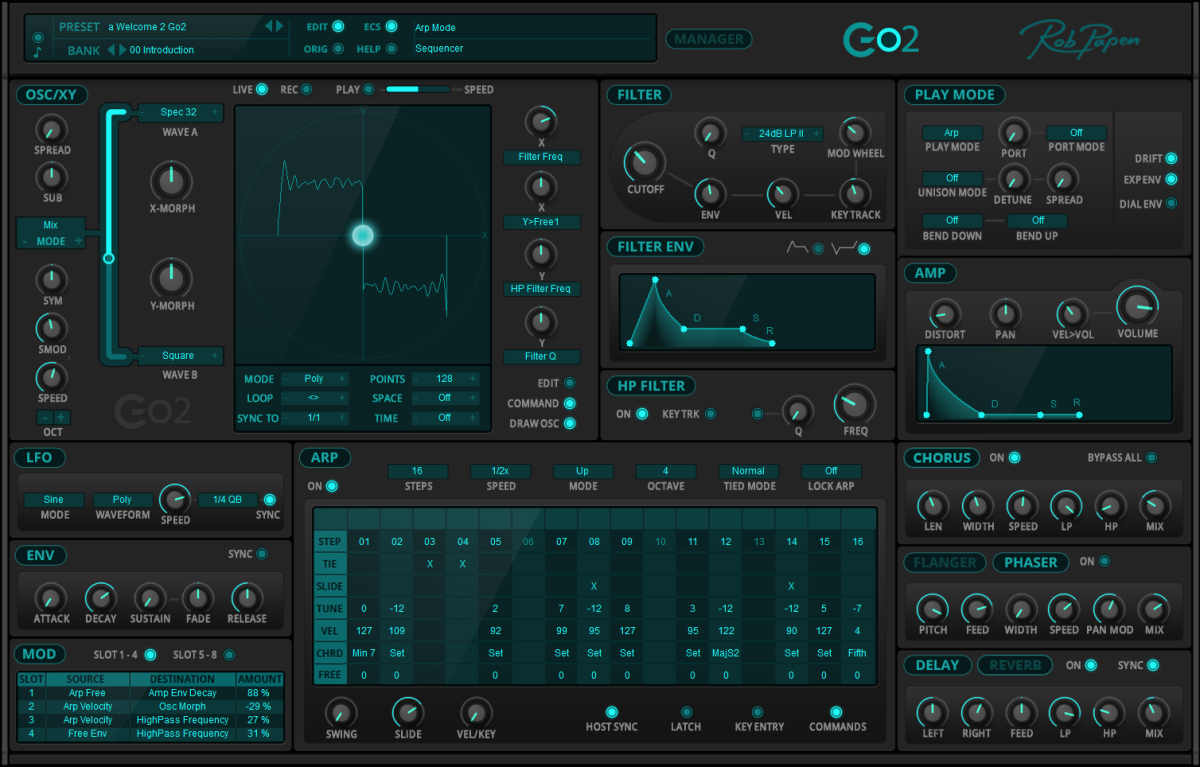 The GUI is well laid out and easy to navigate.

The presets are contained in 16 banks, some by sound type and some by artist. There are quick browse options as well as a preset manager.

The oscillator is the heart of Go2. It uses two different waveforms (from a list of 128 available) and morphs between them using a number of different modes from mixing, morphing to FM and ring modulation. The spread control can be used to turn Go2 into a dual oscillator setup.

There are modulation options using the mod matrix but the XY pad offers further modulation options. This can be used live with a mouse or you can automate / program movement. In effect the position of the XY dot acts as a modulation source for up to 6 parameters positioned around the XY pad. Recording automation is as simple as pressing record and dragging the dot around. There are a large number of controls including playback speed, smoothing sharp transitions, editing points and behaviour when a note is played – i.e. free-running or if the path restarts when you play a note.

The filter section has a main filter (low pass, band pass, notch and comb) and a separate high pass filter connected in series. These have the standard filter controls. The filter envelope has standard and inverted shapes with points that can be dragged to alter ADSR parameters.

The amp has volume envelope controls and also a handy distortion option.

The arpeggiator can be up to 16 steps with a sequencer and a number of controls including a range of play modes and options to tie notes, slide, detune, swing and even a unison option to play chords. There are also really handy latch and lock controls.

Go2 has a free LFO and free envelope that can be used in the modulation matrix. There are 8 slots where you define the source, destination and amount. You can use internal or external sources in the mod matrix.

The effects section contains 3 effects units in series – chorus, flanger or phaser, delay or reverb. These have bypass as well as mix controls. These sound good although if I was being really picky I would have liked to use the delay and reverb together sometimes, however it’e a very minor comment as I tend to use preferred delays and reverbs anyway.

Some of those synths are expensive, complex to learn and often time consuming. I think Go2 achieves that difficult balance of excellent sound quality, value for money, ease of use and a number of unique features that you don’t typically find at this price range. If you’re looking for versatility and a synth that is very easy to use then it’s definitely one to consider. The range / diversity of sounds could well make it your go to synth as Rob Papen intended.

I’ve used Go2 extensively to create the album ‘reverence’ embedded at the top of the review section above. This is an electronic album with experimental, ambient, lo-fi and downtempo themes. It highlights the sound quality of Go2 as well as it’s capability to easily produce a range of styles of music. I’ve largely used presets and these include chords, basses, pads, synths and effects. I’ve processed with a number of effects including Blackhole, H949 Dual Harmoniser, H3000 Factory, Octavox, Ultrachannel (Eventide); Fracture XT (Glitchmachines); Frostbite (AudioThing); SpecOps (Unfiltered Audio).