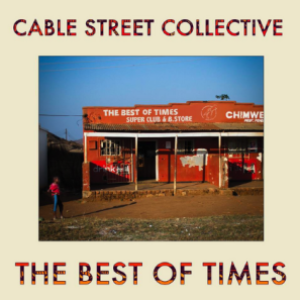 Cable Street Collective on facebook
Cable Street Collective on twitter
BlueSoapMusic on twitter
Formed in 2012 at the same London open mic night that produced Denai Moore, Cable Street Collective combine catchy tunes with dance-inspired beats to create music that mixes African influences (two of the group grew up in Swaziland and Malawi) with UK funky house and a whole host of other sounds from in and around their home bases in East London and Brixton.
And there is an excellent vibe to this EP, Cable Street Collective create a great sound that’s quite hard to define having some great African influences, solid grooves and great playing and vocals. The songs have a real upbeat feel despite the fact the lyrics tell stories that don’t appear to have much hope, kind of like making the best of a bad situation.
The EP is available now on itunes, Spotify and as a physical release. Can’t Take Me Under will be released as a single on 16th February.
Intro The intro song is a great idea comprising of the tuning in of a radio into the next song which cleverly is their own.
Wasted Hours A live version of the song is embedded above. There is a great groove that opens the song, the vocals are great and tell the story really well. There are some great harmonies and the song has a really upbeat feel even though the situation doesn’t seem to have much hope. The song has a great bass line too.
He’s on Fire This song has a really uptempo opening riff, the vocals have a great energy and the song has great momentum with a nice build and release of tension.
Yin and Prang There is a great reggae vibe to the opening riff, solid bassline and great combination of male and female vocals. The bassline gives a great vibe to the song which is also accompanied by some great percussion and a guitar solo too.
Interlude (Feel it Fall) This is quite a short song but even so it has a great groove, solid drumming and great bassline.
Can’t Take Me Under This song continues with the same sort of groove. It has great vocals with really good harmonies and a really nice touch having a blues harp to finish.
Two Cities Again this song has a great vibe, there is some great guitar playing and great vocals. The song has a kind of urgency to the rhythm against the more laid back vocals. Great changes in feel / tension too.

Review of 'Alice' and 'All Gone Wrong' singles by Strobegirl

Review of ‘Finger of God’ album by Azuresands on power_lunch corporation